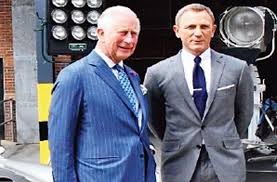 rince Charles sips a glass of Jamaican rum, in a quite hotel room, a fan turning slowly overhead.

He sits by the door in the shadows, waiting for the intruder to appear, shuffling a deck of cards.

The intruder darts in menacingly, promptly pumping six bullets into the bed where a stuff of pillows is carefully placed.

That’s a Smith and Wesson, and you’ve had your six,” Charles says dryly, before dispatching yet another Bond villain.

OK, maybe that’s a bit of a stretch, but …  Britain’s heir to the throne has been offered a special cameo role in the upcoming  James Bond film, according to UK media sources.

Charles, 70, would not be the first member of his royal family to appear alongside 007 — his mum, Queen Elizabeth II, starred in a short homage for the opening ceremony of London’s 2012 Olympic Games.