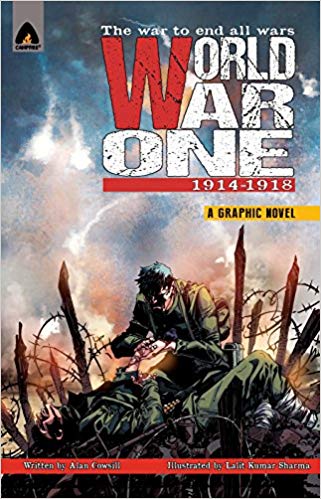 In the summer of 2006, just before the outbreak of war between Israel and Hezbollah, the family of French-Lebanese artist Joseph Safieddine traveled to the Lebanese port city of Tyre for vacation.

Safieddine, who was supposed to join his family members days later, was dumbfounded when he turned on his television in France to see the war begin to unfold in southern Lebanon where his family became trapped.

His new graphic novel, Yallah Bye (Nool Books, 2019), offers a chilling account of his family’s fate during the bombardment, and a painful reminder of the human cost of war at a time of rising tensions in the Middle East.

allah Bye was first published in French in 2015, then in English in 2017. And finally, this week, in Arabic. Publishing house Nool Books, located between Paris, Beirut, and Cairo, has already released several Arabic translations of graphic novels, originally in Dutch, French, and Italian. This time, it is a story set in an Arabic country.

Yallah Bye can be described as a psychological or chamber drama. It focuses on the fate of the Chawadi family, who become engulfed in a war that no one saw coming.

Safieddine brilliantly captures the nonchalance of Lebanese friends and relatives in the south, who assure the Chawadis they are used to Israeli attacks and they will be over in no time. Yet with the intensification of the air bombardments, the mood slowly and gloomily shifts and takes its toll visually on the family.

The plot and drawings oscillate between Lebanon and France.

While in Tyre, the Chawadis flee from one neighborhood to the next, until they seek refuge in the Christian quarter of the city.

Their eldest son Gabriel, inspired by the author himself, follows the news in France, desperately trying to reach his father on the phone. Growing frustrated and desperate, he takes his anger out on friends, his dog, and writes a letter to then-French President Jacques Chirac, asking him to intervene as he spends the day trying to calm concerned relatives and friends on the phone.

The publication of the Arabic version comes at a time of rising tensions between the United States and Iran, which have sparked fresh fears that a new proxy war could break out in the Middle East like the one in 2006, and with devastating impact.

Yallah Bye contains no graphic scenes of violence and death. Tragedy unfolds on the TV screens while Mustapha, the father, watches the news with his neighbors.

The gruesome war is not just embodied by the terrible noise and shuttering the rockets provoke, while they land incessantly nearby. War means scarce food and water, unbearable heat, constant power cuts, sleepless nights, nervous breakdowns and endless bickering between Mustapha and his wife Anna, who are being pushed to their limits.

The distant and sometimes near cries of civilians mourning the loss of their loved ones chill them to the bone. Their dilapidated state and psychological horrors are brilliantly portrayed by Park, who accomplishes the tremendous feat of conveying their physical decline.

In one scene, as the four family members lie stretched on a mattress, trying in vain to sleep, illustrator Park captures the agonizing heat by crafting the dripping sweat on their sulky long faces tempered with red. Their physiognomy is credibly altered from how they appear at the beginning of the book and during the 12 days they were exposed to the attacks.

Park also humanely portrays uncontrolled farts, scratches, the lack of hygiene with the absence of fresh clothes, and how Mustapha and his male friends drown their sorrows in the comforting smoke clouds of their hookahs.

The author Safieddine elaborates how endurance, fear, shame and guilt determine Mustapha’s actions. Part of the novel deals with his guilt for abandoning his home country as a teenager during the Civil War 1975 to 1990. Safieddine subtly portrays how, driven by shame, he risks putting the lives of his family and his neighbors on the line by thinking of helping Lebanese resistance fighters.

His teenage years in Lebanon are elaborated in black and white flashbacks that capture the helplessness of individuals in the face of a much mightier war machine, which could crush entire lives for generations ahead.

US Coronavirus Latest On Sunday 21 June